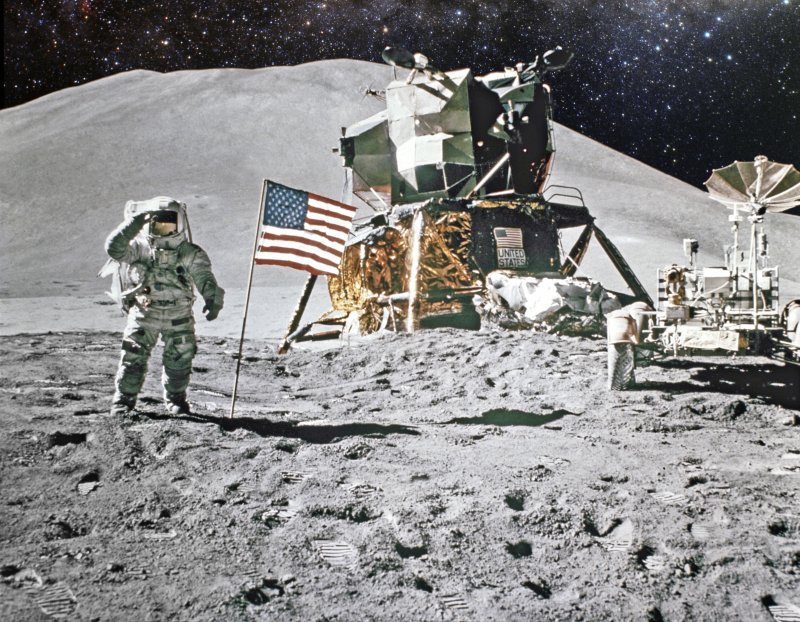 It won't have escaped your attention that 2019 marks the 50th anniversary of the first Moon landing. Inevitably, it's the three astronauts who made the trip who are front and centre of the celebrations.

But Armstrong, Aldrin and Collins were accompanied by a fourth member of the crew, who is often less well remembered. Primitive by our own standards, Apollo's on-board computer was integral to the success or failure of the mission.

And in some respects, the tiny computer's exchanges with the astronauts and mission control gave us a glimpse of the world to come. As they approached the Moon, the two astronauts piloting the Eagle would ask the computer questions, it would provide them with answers and information on which their lives depended.

Fast forward 50 years, and the hardware on Apollo 11 is now closer to the imagined tech of the Hollywood movie released a year earlier, Stanley Kubrick's 2001: A Space Odyssey. Just like the astronauts in 2001 we now talk to computers and they answer back. We talk to computers with names and human voices; they understand us and provide responses based on our questions.

For the social housing sector, the opportunities from this technology are boundless. From a customer service perspective it has the potential to transform the way you communicate with service users and tenants. From a business perspective it can help you to be more effective and efficient.

The tech imagined by Kubrick in the form of the spaceship Discovery's onboard computer Hal, is what we now call Augmented Intelligence (AI). Forward thinking housing associations are now using AI as part of a wider strategy to improve the customer service experience. It's about truly making the shift from analogue to digital and we estimate that over 80% of businesses could benefit.

Banking and retail have been ahead of the curve on this one, spotting early the potential of related technologies such as Machine Learning, Natural Language Understanding and Robotic Processing Automation for their businesses. Virtual assistants can listen in on conversations between customers and staff and give operatives the right response to the customers query. Chat bots can take this one step further: engaging in two way conversations with customers without any human intervention at all.

Excitingly, these innovations can also learn. If a Virtual Assistant can't answer a customer's query and a member of staff has to take over - the operative's answer is automatically added to a Knowledge Base using Robotic Processing Automation. This means the AI will be able to answer the question next time.

Crucially, we also now have tools to ensure customers have a positive experience of the technology. Sentiment analysis, for example, can be used to detect if a customer is becoming frustrated and pass them over to a human being.

Which brings me to an important point: there's still a key role for people in your customer service relationship - AI just enables you to make better use of their talents. By reducing the amount of time your team need to spend on LiveChat or on the phone you can free them up to manage more complex enquiries. For now, it's about leaving the simple and mundane to the computers, while letting people take charge when initiative, creativity and sensitivity are required.

Ultimately, it's about recognising where computers and software have the advantage, and understanding where people can still add value. The Virtual Assistant, for example, never gets tired and can operate round the clock, 365 days a year. Customers won't have to wait in a queue to speak to them or for the customer service centre to open, and if their first language isn't English, it might even help them to get understood. Humans, on the other hand, can offer authentic sympathy and empathy - something which is beyond even the most sophisticated algorithms.

Where this technology is heading in the next 50 years only time will tell. Some said of Kubrick's imagined AI that “he" appeared warmer and more sympathetic as a character than the astronauts. We are certainly a long way off computers being mistaken for humans, the so-called Turing test. For now, at least, AI is like any other positive example of technology: a useful tool aimed at making life better for people and businesses.